Due to the importance of sea control for the Principality, the Fürstlichen Streitkräfte are basically a Navy with a marine arm and a naval air arm. For the structure, see Structure of the Armed Forces of the Principality. Vessels carry the prefix FFS, Fürstliches Flottenschiff, Princely Fleet-Vessel.

The Armed Forces have a number of uniforms for a variety of occasions, the most usually seen is the Service Dress. It ios the highest, most formal Uniform, which the Fürstliche Streitkräfte have.

Another uniform is the office dress, usually worn by the office workers of the Streitkräfte and during office work in general - it is the uniform one usually sees in the barracks.

There are also a number of camouflage patterns in service. 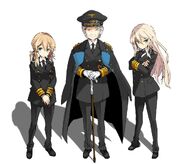 Admiral Findehoof, with two of her Granddaughters, Enya Findehoof and Kiah Findehoof, during a photo shoot, in Service Dress.

Jette Haschenke in Office Dress with a K-2 Carbine. 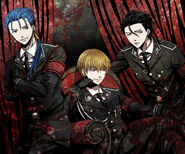 Full Dress Uniform of the Fürstliche Streitkräfte. From left: Roderich Lank, Arvid Schling and Mailo Gher.
Add a photo to this gallery

Also see: Past and present equipment of the Fürstliche Streitkräfte.

The heaviest ground vehicle is the Bär-IFV, the backbone of the infantry and their 'Battlefield-Taxi'. Used in several variations, the Bär (bear) is a versatile vehicle.

Teressien, since 1980, does not have an armoured corps anymore. The Main Battle Tanks were decomissioned in conjunction with the Army Reform of 1980, completing the reorientation towards peace keeping and defense. Some Armoured Engineer Vehicles based on the MBTs still exist, though.

The Fürstliche Streitkräfte plan to replace their SLK-29 Assault Rifles with SLK-36 Assault Rifles by 2021. Main machine gun is the SLG-35 Machine Gun, while marksmen swear upon the PSG-19 Marksman Rifle.

Retrieved from "https://t-s.fandom.com/wiki/F%C3%BCrstliche_Streitkr%C3%A4fte?oldid=8338"
Community content is available under CC-BY-SA unless otherwise noted.