Falconry in Kyrenaia is an old and traditional hunting method and modern sport, focussed onto the hunting of small animals using birds.

Mounted Falconry is a team-sport, with two humans (a falconer and a dog-leader), two horses, a falcon and a mob of dogs, usually Sand Wolves. It's the Dog Leader's mission to drive out the small animals with the dog, said small animals usually being faster then the dogs, but slower then the falcon, while the Falconer's job is to direct his or her bird to hunting the small animal.

The main part of the sport, however, is the caring for the animals, both the dogs and the horses and the falcon, 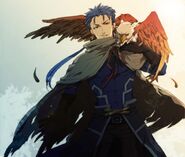 White-Headed Kyrenaian Eagle on the arm of Nesrin, Ilkhana of Fenchu.
Community content is available under CC-BY-SA unless otherwise noted.
Advertisement