The Iris Boarding School Complex Sensha-Do Team, a.k.a. the Coileáin (the cubs), is the Sensha-Do Team of the Iris Boarding School Complex in Fortham. The team was founded in 1989 and shares a love-hate-relationship with the Naval School Sensha-Do Team. 'Commander in chief' of the Team is Ida Taoiseach of the Tribe of Antrim, the wife of the SDF-Army's highest soldier, General Ferris Taoiseach of the Tribe of Antrim, who is one of the founding mothers of the Team.

Aside from the active roster, the Coileáin also maintains a small fleet of historic vehicles and armoured engineer vehicles to fulfill their obligations as part of the Younger Militia.

In 2019, the team was host for the first 2019 Iris Boarding School Complex Sensha-Do Convention. 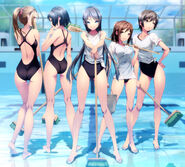 Retrieved from "https://t-s.fandom.com/wiki/Iris_Boarding_School_Complex_Sensha-Do_Team?oldid=13563"
Community content is available under CC-BY-SA unless otherwise noted.