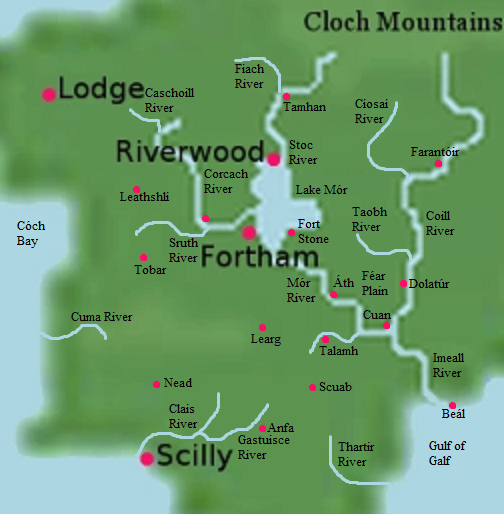 The Lake Mór River System is one of the most important inland waterways of the Free Lands of the Selkie,

The Triburaties of Lake Mór

Lake Mór has two main tributaries, the Corcach River and the Stoc River.

The Stoc River comes down from the Cloch Mountains, where it meets Lake Mór at Riverwood.

The Corcach River has two main tributaries, the Sruth River and the Caschoill River, where it meets the Lake near Fortham.

At the Southern Tip of Lake Mór, the Mór River rises, being one border of the Féar Plain north of Cuan. The other two borders are the Taobh River and the Coill River. The Coill and the Mór meet at Cuan to form the Imeall River. The Imeall meets the Gulf of Galf at Beál, a small harbour town.

Retrieved from "https://t-s.fandom.com/wiki/Lake_M%C3%B3r_River_System?oldid=5590"
Community content is available under CC-BY-SA unless otherwise noted.