The Team is specialized in Cold War Era Armoured Vehicles and has a number of vehicles from that time both in the starting grid and in reserve, including a squadron's worth of Mealltach Reconnaissance Tanks. Team Supervisors from the teaching staff are Commander Finnegan Oíche of the Tribe of Sligo and Lieutenant Commander Viola Cúraim of the Tribe of Cork.

The Team was founded as a permanent fixture in 1943, originally as a training and engineering unit. In 1958, the team participated in its first Tankery Match, winning against the Binn's Team by a very small margin.

In the summer of 2018, the Team visited the Imperial and Royal Monarchy for a student exchange. With them, they had a small vehicle fleet of historical vehicles of the SDF-Army and the SDF-Navy (see: Past Equipment of the SDF-Army).

In June 2019, they were part of the exhibits of the 2019 Iris Boarding School Complex Sensha-Do Convention. They, with the official order from the leadership of the Naval School, honoured both Commander Arvid Damgaard and Cadet Jana Hagedorn, guests from Lillorainen.

During the 2019 Launceston Harvest Festival, the Puisíni had a small detachment for a demonstration match against the Binn Boarding School Complex Sensha-Do Team in the city. Led by Fiona Bláth of the Tribe of Wexford, it was composed of five vehicles, three Faolchú Armoured Personnel Carriers and two Crogall Amphibious Armoured Vehicles.

With the graduation and resignation of a huge chunk of the founding mothers and fathers of the team, most notably of the team captain Fiona 'Fi' Bláth of the Tribe of Wexford, the Team reorganized itself and its active vehicle fleet over the winter of 2019/2020. One of the most important changes was reequipping II. Squadron, Realincse-Squadron, with Mealltach Reconnaissance Tanks to replace the Faolchú Armoured Personnel Carriers. While Sealsaill-Squadron remained the way it was, Raicleabán-Squadron was filled up with members of the former II. Squadron. New flag-squadron became the II. Squadron, headed by Realincse-Aon and Nolwenn 'Nolly' Dallaigh of the Tribe of Antrim.

The 2020- and 2021-Seasons were mostly spent with Administrative Assistance, especially during the winters and with the waves of the COVID-19 Pandemic in the Free Lands.

The Winter 2020/2021 was spent upgrading the Mealltach Reconnaissance Tanks from the Mark II Standard to Mark IV, uparmouring and adding both computerized fire control with a laser rangefinder. The Crogall Amphibious Armoured Vehicles were updated to the Mark III Standard, engine and suspension upgrades coming in handy.

When Dallaigh resigned from her position as Captain by the end of the 2021-Schoolyear, following her own school graduation (and despite her staying with the Naval School, though from now on as an Ensign), the Staff got renewed and worked in by their predecessors: Accountant Seadadh, despite still being with the Naval School for another year until her own graduation, resigned in favour of XAY, the Head Mechanic, Ensign Nora Scriúire, gave her post officially to Ensign Finnya Céileathar and Dallaigh resigned in favour of Cadet Filicia Cnúdán of the Tribe of Sligo.

With Cnúdán, the team was reorganized again, this time also using the influx of Sionnach-I Armoured Personnel Carriers out of SDF-Army Surplusses. That year also saw the introduction of the Tifen-Squadron, the engineering unit supposed to help in cases of administrative assistance. The year 2021 also saw the appointment of a second Attending Teacher, Lieutenant Commander Viola Cúraim of the Tribe of Cork, seeing that his duties kept Commander Oíche at sea quite often.

Tifen-Squadron mostly contains armoured engineer and support vehicles, most famously the vehicles of the Sio-I Family. Tifen-Squadron is not supposed to engage in Sensha-Do Contests. 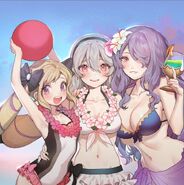 Retrieved from "https://t-s.fandom.com/wiki/Naval_School_Sensha-Do_Team?oldid=17693"
Community content is available under CC-BY-SA unless otherwise noted.