Many schools in the Free Lands have school uniforms.

Some hand them out upon entrance, some hand them out as awards for outstanding achievements in academic, personal or athletic fields in the name of the school, one example being the Ais Boarding School Complex of Silverport.

Girls' School Uniforms are usually called the Culaith mHairnéalaigh, or sailor suit, as many model remind people of the sailor suits worn by the sailors of the Fleet of the Merchant Guild of Leuda, back in the 18th and 19th centuries.

Colour Codes, cuts and exact properties vary much amongst the schools in the Free Lands, but there are three distinctive styles to see: The actual Culaith mHairnéalaigh, the Blazer and the Blouse.

In winter, students are usually permitted to bring overcoats with them.

In summer, most schools allow to leave the blazer at home.

The Blouse Style differs from the Culaith mHairnéalaigh by the absence of a sailor collar. Other then that, both styles are rather similar to each other.

Blouse Uniforms are usually worn on the islands of the Archipelago. 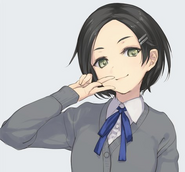 Mona Tairseach of the Tribe of Wexford, Ais High School, Winter Uniform, also serving as an example for a Blazer Style Uniform..

Cecilia Dord of the Tribe of Tipperary in the uniform of the Banna High School, an example for the Blouse Style Uniform.

Several students of the Póraitheoir High School in Cuan, in Blazer Style Uniforms. To the far right, Celina Treoraí of the Tribe of Louth, in the middle, Fiona Eas of the Tribe of Monaghan.

Cabá-Style or Collar-Style are often likened to military uniforms, most specifically SDF-Navy Blue Dress, and there are indeed parallels. Usually either black or dark blue, these uniforms with standing collars and and top-down buttoning and straight pants are iconic to many High and Middle School Students.

Some schools also equip their boys with sailor suits, which are called Culaith mHairnéalaigh as well. Much like the female version, it is allowed to bring an overcoat during winter. Caps are optional. 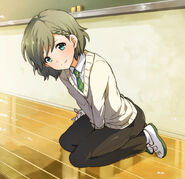 Two boys in Collar-Style, or Cabá-Style, Uniforms.
Add a photo to this gallery

Retrieved from "https://t-s.fandom.com/wiki/School_Uniforms_in_the_Free_Lands?oldid=9824"
Community content is available under CC-BY-SA unless otherwise noted.