The Selkie Wiki
Register
Don't have an account?
Sign In
Advertisement
in: Kyrenaian Armed Forces, The Armies of the Five Deserts

The Armies of the Five Deserts

View source
watch 01:54
Obi-Wan Finale - The Loop
Do you like this video?
Play Sound

In total, the Armies of the Five Deserts have around 650,000 men and women under arms, plus a reserve force of another 10 million people (all people, who did their Service with the Army and are between 20 and 30 years of age).

The Army Air Command is the Kyrenaian Army Air Force and the larger of the two air forces of Kyrenaia, the other being the Sultan's Navy's Naval Aviation Command.

Manned military aviation in Kyrenaia began 1780, with hot air baloons being set up to provide a bird's eye view of the battlefield for reconnaissance purposes with the first aerial bombardement following in 1801: One of the baloons tore loose, floated over the enemy lines - to loose weight, the pilot threw weights out of his basket, throwing them down into enemy lines. The enemy, believing this to be an actual manoeuvre, was surprised and fled.

Ever since their first deployment in 1921 during the Oil War of 1920, Chemical Weapons were under the responsibility of the RKA, from development, to storage to deployment and usage.

While strikes with nerve gases were considered at several points during the Decolonization Wars, they were never used (this is, nowadays, public knowledge).

In 1999, Kyrenaia signed the Convention on the Prohibition of the Development, Production, Stockpiling and Use of Chemical Weapons and on their Destruction, or Chemical Weapons Convention, CWC. While the efforts to destroy the substances lasted until 2009, there are no such substances in the arsenals of the Kyrenaian Armed Forces these days in any militarily relevant amounts - the RKA does operate three plants producing Schedule 1 Substances, their produce used to test and develop new methods for protection of both civilians and military personell. The results of that research are shared with the world and the Kyrenaian Government insists on regular checks of international observers.

International observers presume, that the signing and ratification of the CWC never came out of the Goodness of the Sultana's Heart, though, but was a political ploy of the Sultana and her Grand Vizier, Mahmut al-Zahir, to better Kyrenaia's standing in the world.

When going outside without a helmet, soldiers usually wear an Isinya, a traditional headscarf of wool, which is worn around the head to protect from heat, sun and sand. Sometimes, soldiers fix the Isinya around their head by a rope, the Agalsinya.

Mechanics of the Armies of the Five Deserts in Green Uniforms.

Infantrywoman in Desert Uniform, with the old Rakhis Assault Rifle. 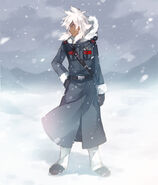 Dark Winter Overcoat, Blue Dress, in the Territory of Jalid.

Actual Commander of the Divisions, the Central Air Defense Command and the Special Forces are the seven Generals, who each have a Lieutenant General as their second in command. The Brigades are commanded by Brigadier Generals.

From there, it goes down in a classical way of Colonels, Lieutenant Colonels, Majors, Captains, First Lieutenants, Second Lieutenants and so on.

It is usual for Royals to serve in the Armed Forces and most choose the Armies of the Five Deserts. The Order of the Tabardariyya stands outside of that command structure and is an independent organization.